To give you the best possible experience the site uses cookies. Find out more. 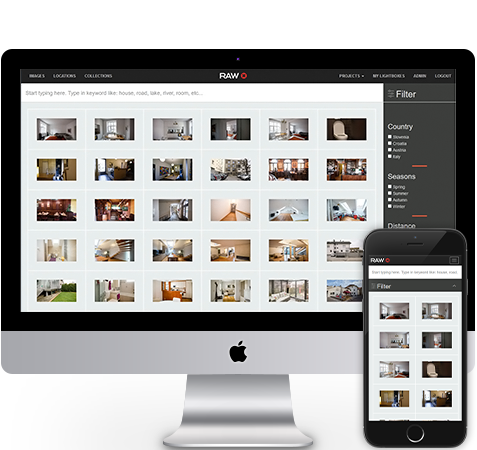 RAW - the industry leader in providing full services for audio-visual shootings location - wanted to boost their sales by going digital. Their usual process involved numerous back-and-forths, emailing locations and pricings, to coordinate the customer's shooting vision with RAW's locations. Our platform solution automated and sped up the process from inquiry to sales.

We built a platform which showcases all the locations RAW has to offer. The shooting customer searches the database to find images of shooting locations. Ranking the image results as the best match for search, the customer can also filter the results for the distance from shooting location, to chose the best locations for multiple shots within one day. The preferred locations can also be saved in location albums for later (re)viewing until a final selection is made.

In the old model, RAW and the shooting customer kept on sending emails back and forth until a final decision was made. With the platform the sales process was sped up and automated, saving time and money. The customer prepared an album of locations and reviewed them until a final decision was made. The RAW sales representative prepared an offer based on data already available in the platform database.

Technologically the platform was developed as a cloud solution implementing S3 object storage. This brought several UX and financial advantages. The image cloud storage sped up the download of location images and increased the usability of the platform. In comparison to in-house server hosting of location images, the cloud solution offered greater reliability of service, safety (lesser chance of losing data on distributed servers), increased accessibility for all devices, and even more, we lowered hosting costs for RAW by implementing a pay-as-you-grow hosting model.

From Challenges to Bussiness Opportunity

Extra functionalities were built within the platform. Not obviously seen in the mechanics of how it functioned but felt as a smoother user experience when using the platform:

We implemented a gradient semantic ranking algorithm for search results. When a user searched for the desired location, the results appeared ranked from best to worst match. Giving users what they look for increased satisfaction with the service.

New images loaded onto the screen only when the user scrolled down. In this way, we downloaded only those thumbnails, which were necessary. Decreased server load sped up image delivery time. From the user perspective, new images were present as fast as he scrolled, without noticing, they were always downloaded anew.

By developing the download-as-you-scroll and preload-similar-preferences we diminished the server load. Fewer demands for image downloads at the same time meant lower costs and faster speeds. So the functionalities improved both UX for the user but also lowered costs for RAW.

and explore our Scouting solution further.